Elon Musk (of Tesla Motors & SpaceX fame) recently tweeted his frustration with LA’s infamous traffic jams, “Traffic is driving me nuts. Am going to build a tunnel boring machine and just start digging”.   His message wasn’t just an idle rant. By the end of January, Musk has already started test borings on the campus of SpaceX’s LA campus.

Of course, traffic tunnels aren’t new technology. The oldest tunnel in the US, the Staple Bend tunnel in Johnstown, PA, was completed in 1834, or more than 180 years ago. Musk intends to bring his inventive nature to the tunneling process itself. His goal is to increase boring speeds by “500 to 1,000%”! An auspicious target, for sure.

Musk’s tunneling experiment is likely tied to his hyperloop desires. He is intending to build a vacuum type tube to transport passengers from LA to San Francisco. Traveling at speeds of up to 750 miles per hour, the trip would take all of 30 minutes (vs. the current 6-hour car ride). 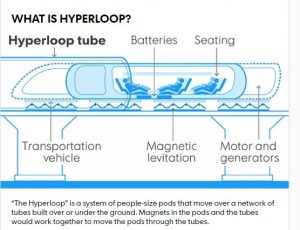 Musk’s original Hyperloop design envisioned an above-ground system on an elevated platform. However, tunneling, particularly under existing state highways or railroad right-of-ways might reduce public opposition to the project. There is the pesky challenge of the San Andreas fault and the too frequent California earthquakes. Whether above or below ground, an earthquake would seriously impact a vacuum-sealed tube, not to mention a traveler going 750 miles per hour.

But with any technology leap (particularly construction technology), hurdles are made to be breached. In fact, steam engine technology for trains was initially considered highly dangerous, as the “human body could not physically travel faster than 50 miles per hour” – a self-imposed hurdle that was quickly overcome.

Are you facing any “traffic jams” in your building? AKRA’s Building Solutions can solve your space needs so you can seize your organization’s opportunities.