The recent icy blast offered a reminder of single-digit and below zero temps that winter can deliver.  Historically, the construction season would end, as winter started.  But no longer.  Modern technology has tamed mother nature even in the wildest of climates.

“Ice Road Truckers”, a History Channel reality series, highlights the hazards of moving material in arctic climates.  But behind the scenes, Alaska’s DOT had the tougher task of performing emergency road construction during winter flooding.  And it wasn’t done from the comfort of an 18-wheeler.

Actually, Alaska DOT crews welcome the cold weather, because much of the roadway lies on permafrost.  If the permafrost ever melts, the roadways will disintegrate, creating mud up to 3 feet deep.  More than 400,000 board sheets were used to cover 50 miles of permafrost as a year-round protector. 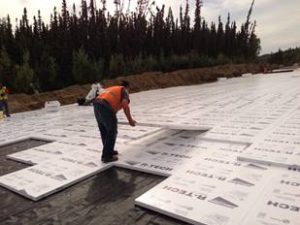 Laying those boards, in winter, required heated jackets, boots, and gloves for the diligent crews.  The gear included an ultra-light heated jacket (Ravean) that was funded by a recent Kickstarter campaign. 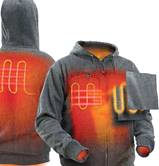 In a similar vein, GPS and LIDAR technology (combined with heads up displays) allow Alaska DOT trucks to operate in zero visibility conditions (up to 45 MPH!).

Thankfully, the Midwest doesn’t face such harsh conditions.  And, “Necessity” as the mother of invention has successfully battled mother nature to allow construction to move forward no matter what the weather.